The Courthouse Hotel is home to SHIFTs new commission with Re-Dock as part of Heritage Open Days Unsung Stories, recreating the trial of Alan Turing and Arnold Murray in the orginial courtroom where it took place 65 years ago through Virtual Reality (VR) and live perfomance.

The Courthouse is an incredible Grade II listed building, originally designed by renowned architect, George Moneypenny and built in 1818. A three-storey Georgian property is constructed from sandstone block and imposing columns, the grand building boasts high decorated ceilings and wood panelled walls. In 2010, the Ministry of Justice closed the Sessions House and moved judicial proceedings to the Courts in Crewe, leaving the magnificent 17th Century building empty. Cheshire-based hospitality group Flat Cap Hotels acquired the property in February 2016 and work began in early 2017 on reinstating the magnificent building back into the community, allowing public access to building for the very first time. Flat Cap Hotels have been involved in the sensitive restoration of the former Knutsford Crown Court, one of the town’s most iconic and eye-catching buildings.

Historical background and analysis of the Sessions House

An advertisement placed in the Chester Chronicle for August 1816 sought the services of an architect for a New Sessions House, Grand Jury Room and other conveniences at Knutsford; and also for a gaol providing reception for 150 prisoners, with a dwelling house and suitable accommodation for a keeper. George Moneypenny was appointed, having submitted an estimate for £30,814. Moneypenny was experienced in the design and building of prisons, having been responsible for the gaols at Leicester (1790-92), Winchester (1805), Exeter (1807), and alterations to Petworth (1816). He himself was later imprisoned at Leicester Gaol for debt. In his design for the Sessions House, Moneypenny was no doubt influenced, if not to some degree directed, by Thomas Harrison, whose Shire Hall – part of the Castle complex – was built between 1792 and 1801. For the layout of the prison, Moneypenny also adopted a variation on the pantoptican plan which was pioneered by William Blackburn, and used by Harrison in the layout of the Chester gaol. 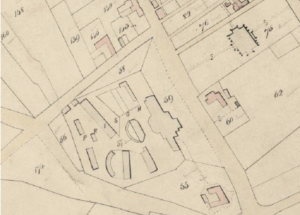 The construction, however, did not go smoothly. Work commenced in the spring of 1818, but by October bills of £31,000 had already been paid, exceeding Moneypenny’s original estimate, with other bills due amounting to a total of £40,000. Moneypenny advised that on top of that a further £16,000 would be required for completion. The Magistrates’ Committee accused him of deceiving them (even though much of the additional work had been either unforeseen or caused by their own changes), and Moneypenny was dismissed. The contractor, William Heap, continued the works until the end of the year, when he asked for additional payment, and was also sacked. There followed a lengthy legal dispute, which was finally settled by the King’s Bench in Heap’s favour. The defendants were ordered to pay £16,647.6s.9d owed to Heap, and the magistrates had to pay an additional £11,000 for measuring, arbitration and plaintiffs’ law costs[1].

In 1840 the prison was enlarged by the construction of an additional 100 cells, designed by the surveyor Samuel Fowls. A further extension providing women’s accommodation was made to the prison in 1852. In 1846 a new Governor’s House was erected outside the walls (now the Town Council offices), to the design of Edmund Sharpe.

The construction of Court 2 is not documented. It has generally been assumed that this too was designed by Moneypenny, but the style of the court, including its roof form, internal dome and plasterwork, is late-19th rather than early-19th century. The Nether Knutsford Tithe Map of c.1847, reproduced above, shows a building on the north side of the original courthouse of roughly the same proportions as Court 2, but it seems probable that this was rebuilt or remodelled as a courtroom towards the end of the 19th century. Around 1900 the cell block to the north of Court 2 was added as also was the Police Station at the junction of Toft Road and Love Lane. These are both seen on the map. The prison was closed c.1913. During World War I it was used to accommodate prisoners of war and conscientious objectors, and then in 1922 it briefly became an Ordination Training School started by the Reverend Philip (Tubby) Clayton, who went on to create Toc H. The prison was demolished in 1934 and later developed as Booths supermarket and car park.

[1] The defendants were Sir John Thomas Stanley, Egerton Leigh and Trafford Trafford, local gentry and landowners, who were appointed to superintend the works on behalf of the Magistrates for the County of Chester.

Your ticket for the: The Courthouse – a short history: Regina V Turing & Murray